You get a basic idea which comes into conflict with its opposite, and the original idea is therefore modified: thesis — antithesis — synthesis. Of course, it does not stop at synthesis, but moves on to a new antithesis. This idea is known as dialectics.

The individual had the right to be educated — the following century saw a huge growth in demands for an provision of education for the masses — and the right to vote — even, eventually, the right for women to vote — in a democratic state. The Industrial Revolution, which also began in the 18. century, saw humanity harnessing the elements, and the rise of mass production and, in time, mass reproduction, mass media and mass communication.

There was ongoing dialectical struggle between two different classes, whether it was the lord and serf in the feudal days, or capitalist and worker in his own time. Each time the battle would lead to mutual destruction or a revolution in society.

The base is the way that the economics of a given society are organized, for example whether it is an agricultural or industrial economy, who owns and exploits the resources and what form economic exchange takes place.

The base determines the superstructure. 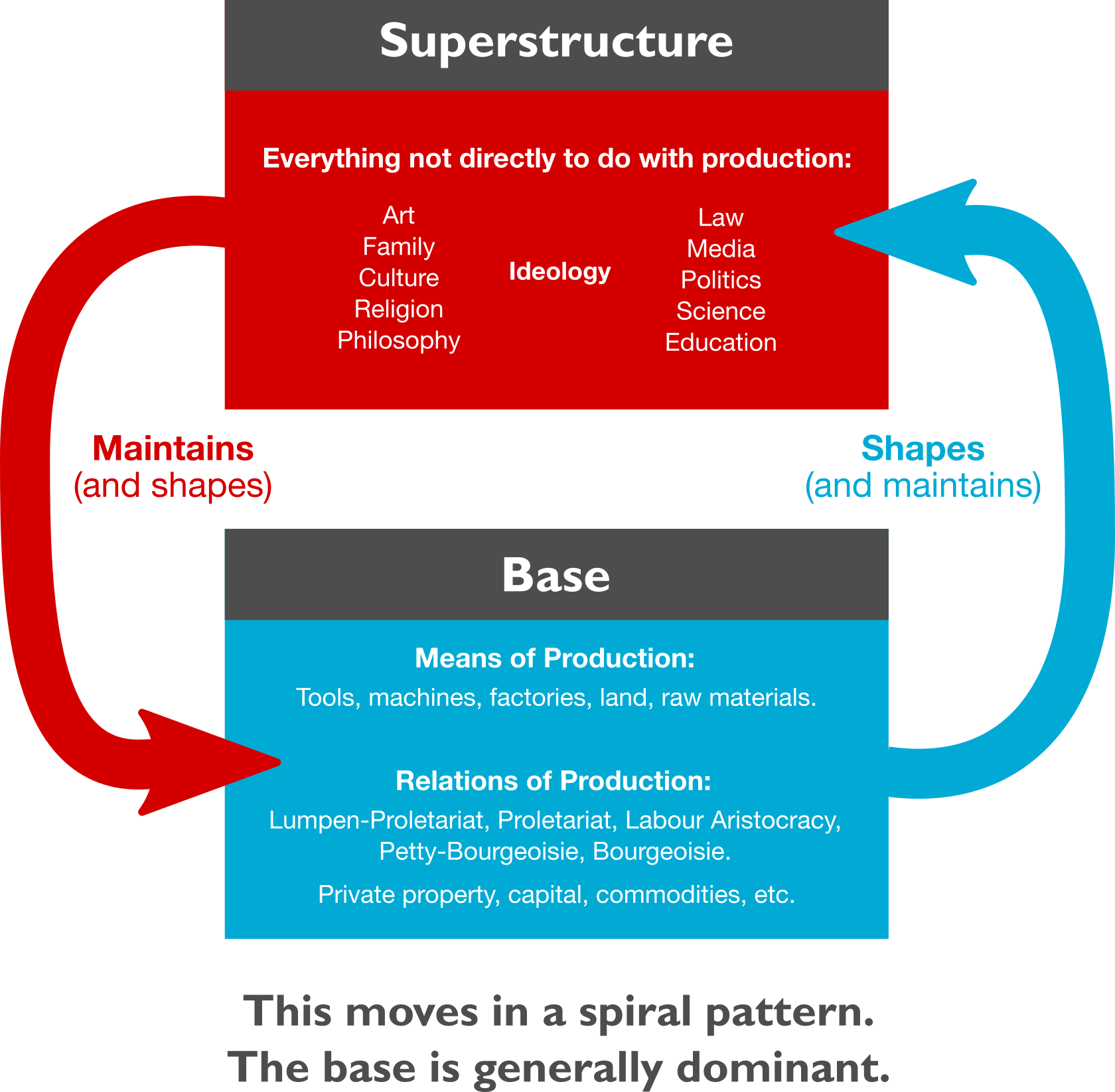 A film needs to be considered as a product of a particular time in a period of historical development, and is produced under certain economic conditions. It reflects and comments upon class relations within its originating community, even on occasions criticizing such structure. The bottom line is that a film is a means of selling tickets — as well as iced drinks, peanuts, popcorn, ice cream and nachos — by appealing to as wide an audience as possible. The bigger the budget, the less likely it is to be difficult or challenging.

Any economic system seeks to perpetuate itself, and power-holders seek to make us share their ways of thinking — including the idea that it is fitting that they be in charge.

Ideology is a set of (mis)representations of the world that make us see it in a particular way.

Films might be seen as little more than ideological parables in which good triumphs and social order is always desirable.

Ideology was, to some extent, negotiated and consented to by the exploited.

Alternatives to the dominant ideology were allowed to circulate through controlled channels, to give the illusion of greater freedom and to let off steam.

Education was a means of manufacturing consent and inculcating the ideals of the controlling forces, with the law, courts and prisons as means of enforcing the lesson.

He saw that cultural texts could potentially manufacture consent or educate the masses into becoming revolutionaries.

In 1916, he defended silent cinema against the charge that is was killing theater. He felt that theater had become and industrial practice —, the following year he suggested that if more money could be made by selling peanuts and iced drinks at theaters than putting on plays, they’d likely abandon play. Silent film was a purer form of theater, and devoid of the empty intellectual content of playhouse. Unlike a play, a film would promise little, but delivered equally little. Gramsci was aware of the ambivalent power of cinema as it developed to reach the masses. There would be audiences which would go to see Clueless but would avoid a worthy adaptation of a canonical author.

The ISAs operate as carrots to persuade us to behaves in a particular manner — the Church, the family, the legal system, political parties, educational systems, trade unions, media and culture — as if it is our own free will, although there is not necessarily much freedom in the choices we make.

If carrots fail, there are the sticks of the RSAs — the government, police forces, law, courts, prisons and the armed forces — to punish us. Film can operate as an ISA.

Jean-Luc Comolli and Jean Narboni have argued that every film is political because it is the product of an ideological system.

The film may endorse a particular ideological construct such as the idea that the individual matters and can make a difference to the world, the individual can improve him or herself, good will triumph, effort will be rewarded, and financial comfort and a stable marriage are the best reward.

Some films do confront ideology by being overtly political, although some of them inadvertently end up supporting dominant ideology after all.

Other films confront ideology by subverting or ironing out the message, or by appearing to endorse ideology but critiquing it through showing contradictions in the ideas.

Some films have a political edge, but end up using conservative forms in which one man is pitting against the system and has a typically bourgeois, middle-class narrative structure.

The Role of the Marxist Critic

The role of the Marxist critic is to expose the ideological blind spots of film, to note the contradictions between form and political content and to engage with any political critique.

For Comolli and Narboni radical films must have both a political agenda and a radical form.

Benjamin: “The Work of Art in the Age of Mechanical Reproduction”

Adorno in particular wrote of what he called the culture industries, which enforced both a standardization of form — the three-minute pop song, the 90-minute feature film, particular narratives — and a dumbing down of the content.

In the name of democratization the producers of films may be setting out to attract 11-year-olds, but in actuality, they are trying to make use into 11-year-olds. Mass culture is like heroin — it appears to solve a need, but it is only a temporary comfort and leaves us wanting more. It makes us feel better and flatters us — and often it appears to include political messages to flatter us as to our intelligence, whereas it is actually keeping any debate under control by acting as an escape valve. A transcendental art was possible — but access to it would involve the revolutionary rearrangement of society.

Benjamin, in his _he Work of Art in The Age of Mechanical Reproduction, notes how art, in a time of mass production, loses its aura of authenticity and originality — there are now many Mono Lisas, on postcards, posters, t-shirts, mouse-mats and so forth.

And yet film, despite being equally industrial, has a positive function: the spectator of a film is turned into a critic, both of film reality. The actor is representing him or herself to the mechanical device of the camera, without any feedback from audience and lacking the aura of a total, theatrical performance.

The filmed snippets are sutured together to form a totality observable by an audience, and these inevitably have an impact on the audience — Benjamin is here following Arnheim and Pudovkin. Film, as the first art form which shows that material play tricks on consumers, can make viewers aware of the problems of representing the material.

The postindustrial period began somewhere between the end of the Second World War in 1945 and the end of reconstruction in the 1960s.

The 1960s saw the increasing use of nuclear power and electronic machines, the fall of old empires and the eclipse of the nation-state by multinational corporations.

The aesthetics celebrated the copy or simulacrum over the original, style over substance, demonstrated a failure of emotion and individualism, and frequently would be characterized by pastiche or nostalgia for an imagined golden age.